Gartner launched technology trends for 2020 in its recently concluded IT Symposium/XPO. The report highlights some emerging trends that might take the industries by storm in the next 5 years and have not gone very mainstream as of now.

As per David Cearley, vice president and Gartner Fellow – “ People-centric smart spaces are the structure used to organize and evaluate the primary impact of the Gartner top strategic technology trends for 2020. Putting people at the centre of your technology strategy highlights one of the most important aspects of technology — how it impacts customers, employees, business partners, society or other key constituencies. Arguably all actions of the organization can be attributed to how it impacts these individuals and groups either directly or indirectly. This is a people-centric approach.”

Further, he said, “ Smart spaces build on the people-centric notion. A smart space is a physical environment in which people and technology-enabled systems to interact in increasingly open, connected, coordinated and intelligent ecosystems. Multiple elements — including people, processes, services and things — come together in a smart space to create a more immersive, interactive and automated experience.” 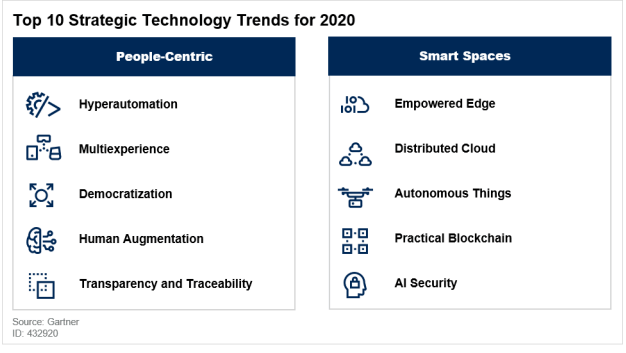 Following are the technologies categorized under People Centric:

As per Gartner’s Report, Hyperautomation is the combination of multiple machine learning (ML), packaged software and automation tools to deliver work. To put it simply, the digitization of process.

Understanding the range of automation mechanisms, how they relate to one another and how they can be combined and coordinated is a major focus for hyper-automation.

This trend was kicked off with robotic process automation (RPA). However, RPA alone is not hyper-automation. Hyperautomation requires a combination of tools to replicate pieces where human intelligence is required.

Often hyper-automation give rise to a digital twin of the organisation (DTO) that enables organisations to first test the virtual model of any process, product or service and counter the problem that might crop up during actual implementation. It doesn’t just help you to create a static replica rather a dynamic and representation of the actual expected outcome. Thus, providing a significant insight into the business processes and driving the overall business strategy.

As per the report, multi-experience will replace technology-literate people with people literate technology. Every interaction with a system now gives rise to multitouch points, unlike traditional computers due to the growing adoption of wearables and sensor-based devices.

As per Gartner’s projection, by 2020, at least one-third of enterprises will have deployed a multi-experience development platform to support mobile, web, conversational and augmented reality development.

“ The model will shift from one of the technology-literate people to one of people-literate technology. The burden of translating intent will move from the user to the computer,” said Brian Burke, research vice president at Gartner. “This ability to communicate with users across many human senses will provide a richer environment for delivering nuanced information.”

The report puts democratization as the third major disruptor in the people-centric approach category. Reinforcing the importance of citizen data scientists, democratization will lead to greater adoption of advanced technology without the need for any extensive investments in training the workforce.

The scenario will shift towards AI-driven coding and testing, hence a lesser reliance on data scientists for something like a data modelling exercise.

As per Gartner, by 2023, four key aspects of democratization namely application development, data and analytics, design and knowledge tend to accelerate.

Whereas on the physical experience side, its application will revolve around enhancing physical strength or aid people with disability. We have seen advancements of these devices to a certain extent in the form of implants of technology within or on the body of the disabled. Further, we have seen it as wearables providing safety to our workers.

Check out the data trends

Every organisation is now aware of the importance of storing data. But, the amount of information that is captured by organisations around the world and the incidents of vulnerabilities of this information has given in to trust crisis among consumers. Their growing demand towards exercising better control over this data. Regulations like GDPR is laid out across countries to set ground rules.

As per the report, the trend requires putting effort towards six key elements of trust, such as Ethics, Integrity, Openness, Accountability, competence and consistency.

Following are the technologies categorised under Smart Spaces:

The evolution of distributed cloud will increasingly provide a common or complementary set of services that can be centrally managed but delivered to the edge environment for execution.

Empowered Edge is about how emerging technologies are coming together to formulate smart spaces to bring their application and services closer to people. The idea behind empowered edge is to keep the information processing, content collection and its delivery closer to the source of information. Hence, keeping traffic local and distributed to avoid any latency.

The increasing adoption of Internet of Things (IoT) devices will empower it further. The report points out that by 2023, there could be more than 20 times as many smart devices at the edge of the network as in conventional IT roles.

Further, Mr Brian Burke said “ Much of the current focus on edge computing comes from the need for IoT systems to deliver disconnected or distributed capabilities into the embedded IoT world for specific industries such as manufacturing or retail. However, edge computing will become a dominant factor across virtually all industries and use cases as the edge is empowered with increasingly more sophisticated and specialized compute resources and more data storage. Complex edge devices, including robots, drones, autonomous vehicles and operational systems will accelerate this shift.”

It refers to the distribution of public cloud to an outside location of service providers’ data centres, but are still in their control, that is, they are held responsible for cloud service architecture, governance, operation, delivery and updates.

There are multiple benefits to this approach such as latency concerns are removed as well as regulatory requirements like data sovereignty are met too. Also, it offers the benefits of a private local cloud.

Autonomous things are devices or systems that automate tasks that were earlier performed by humans. Primarily we know them in the forms of drones, robots self-driving cars and smart devices. They will increasingly use AI as the underlying technology and go beyond the hard-coding every aspect of it to make a fully autonomous form.

While they are currently being used in closed and controlled environments but as their capability will improve and regulation would be in place, we will witness greater usage in open and public spaces.

“ As autonomous things proliferate, we expect a shift from stand-alone intelligent things to a swarm of collaborative intelligent things where multiple devices will work together, either independently of people or with human input. For example, heterogeneous robots can operate in a coordinated assembly process. In the delivery market, the most effective solution may be to use an autonomous vehicle to move packages to the target area. Robots and drones aboard the vehicle could then affect the final delivery of the package.” said Mr Burke.

“ Blockchain, which is already appearing in experimental and small-scope projects, will be fully scalable by 2023” – Gartner

It is like a distributed ledger that stores a list of virtually signed, irrevocable transactional records shared with all participants in a network. Once the regulations and security frameworks are in place, it will find its  application across all industries. It is being processed by the experts to become a revolutionary technology in tackling trust, transparency and transaction-related issues.

According to the 2019 Gartner CIO Survey, 60% of CIOs expect some kind of blockchain deployment in the next three years. In terms of industries that have already deployed blockchain or plan to deploy it in the next 12 months, financial services lead the way (18%), followed by services (17%) and transportation (16%).

As the adoption of AI and ML-based applications and devices will increase, AI security is going to be of paramount significance.

The report highlights — protecting AI-powered systems, leveraging AI to enhance security defence, and anticipating nefarious use of AI by attackers – as the three key areas of focus for AI Security.

You can read the complete report here: https://www.gartner.com/en/doc/432920-top-10-strategic-technology-trends-for-2020

Find the right implementation partner in us! Throughout the years, manufacturers have been on a quest to improve their operations by increasing producti... How Analytics is transforming Reverse Logistics

Have you returned a good or item that you have ordered this week or month? If you buy goods online, your an... How Big Data is Helping Zomato and Other Food Tech Companies

A research firm stated that the online food delivery market in India is expected to hit $4 billion.
...